The City of Leipzig (Germany) has won the first prize of the city.people.light awards 2014. Copenhagen (Denmark) and Strasbourg (France) have won the second and third prize respectively.

The city of Leipzig in Germany was awarded the first prize for its urban regeneration of Richard-Wagner-Platz at the 12th annual city.people.light awards ceremony on the 7th of November 2014 in Dubrovnik, Croatia.

Mr. Rainer Barth, representative of the city of Leipzig, commented: “We wanted to pay homage to the historical roots of Leipzig, that’s why we launched a public competition to redesign the lighting through a democratic decision process. The project is an excellent example of how to involve citizens and other stakeholders in the preparation of an urban regeneration project.” The lighting design of Richard-Wagner-Platz was done by the lighting design office Licht Kunst Licht Bonn/Berlin. 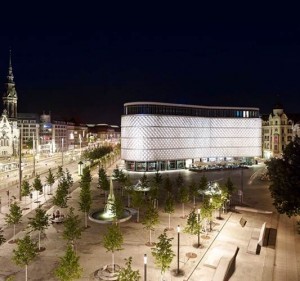 Second prize went to Copenhagen, Denmark for it’s Bicycle Snake bridge, a bridge exclusively for cyclists which is softly illuminated with built-in lighting in the hand rail to enrich the area with a bright, visual element.

Third prize was awarded to Strasbourg, France for the lighting of the Place du Château square, which offers a new perspective on this prestigious space, highlighting the Cathedral and historic buildings.

The cities of Pula (Croatia) and Wellington (New Zealand) both received special mentions, and Ankara (Turkey) won the People Choice award with the most votes.

Organized by Philips and LUCI, the annual cpl award recognizes urban lighting projects which best demonstrate creative efforts to plan sustainable lighting infrastructure into city redevelopment initiatives for the benefit and well-being of those who live, work, visit or do business in the city. This year the competition had entries coming from all 5 continents making the award contest a global competition.