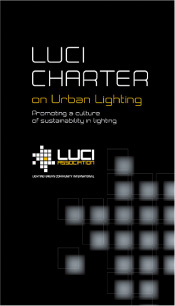 The LUCI Charter on Urban Lighting is a major step in the evolution of the LUCI network. It aims to bring cities together around common principles in lighting and to mark the network’s commitment to sustainable development. It is the product of contributions from more than 40 cities around the world and more than a year of work led within the network by the City of Leipzig.

Promoting a culture of sustainability in lighting

This Charter aims to give a clear view of the issues that should be taken into account by sustainable lighting strategies, while simultaneously gathering LUCI members around a common vision of urban lighting. The Charter addresses challenges common to all:  energy efficiency, improvement of the quality of life, maintenance, recycling, light pollution, the cultural and social dimensions of lighting …
Above all, it provides a reference framework within which towns and cities can develop their own lighting strategies.

At the moment, there are 61 signatory cities :

“With the “Leipzig Charter on Sustainable European Cities” signed by the European minister’s conference in 2007, Leipzig’s name has become synonymous with sustainability throughout Europe. With the “LUCI Charter on Urban Lighting” Leipzig is continuing on its path in the field of sustainable urban lighting.”
Wolfgang Kunz, Head of the City Planning Office, Leipzig (Germany)

“The City of Ghent ratified the international LUCI Charter on Urban Lighting because it contains all the policy goals which the City of Ghent has already integrated in its own lighting strategyand environmental policy.”
Martine De Regge , Deputy Mayor of Public Works and Mobility, City of Ghent (Belgium)

“The Charter is a positive step for our growing network and reflects the commitment of our cities to tackling this issue and promoting responsible urban lighting.”
Councillor Allan Stewart, Deputy Lord Provost, Glasgow City Council (UK)

“The LUCI Charter on Urban Lighting marks a new stage in the development of the LUCI network and reinforces LUCI’s role in setting the international agenda on urban lighting.”
Jean-Michel Daclin, Honorary President of LUCI and former Deputy Mayor, City of Lyon (France)