Sound and light – a harbinger of change in Eskilstuna

The City of Eskilstuna has developed a semi-permanent sound and light installation, entitled “Ljudgången”, near its Central Station to draw attention to new developments planned for the area.

The installation, located in a tunnel that will be rebuilt when the new station area is developed, aims to start a conversation with citizens on the upcoming changes in the urban space.

The installation synchronises an audio loop with two moving laser light projections on the tunnel ceiling and floor, thus creating moving clouds of coloured light and sound at the entrances of the tunnel. The light reflects the movements of the people passing through the tunnel and the sound reflects the character of Eskilstuna. 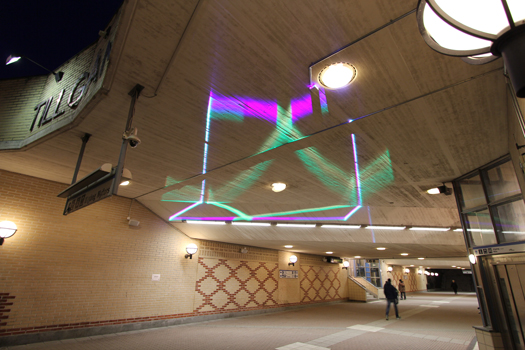 The noise from passing trains is balanced with subtle sounds of Eskilstuna from different locations and fragments of its industrial past – metallic sounds of big machines, sounds of water and of people meeting at the main square downtown, etc. The bright laser colours used complement the more melancholic sound patterns. 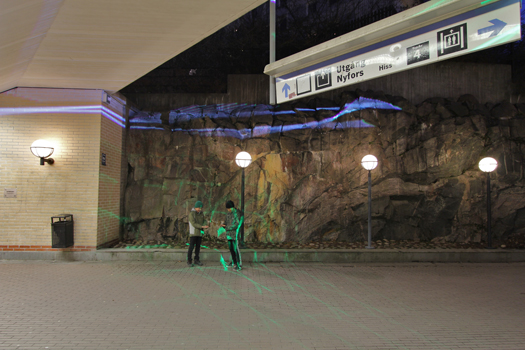 “We wanted to create a new context and a more positive identity around a shabby environment without having to make a major investment in the material. The installation can be reprogrammed and moved to another place. The laser technique is used because it has good visibility in an already quite bright environment,” explains Karin Ermegård, Landscape Architect at Eskilstuna Municipality.

Sensors make sure that the laser lights never go below the permitted height in the tunnel – the projections are automatically switched off if the beams go in the wrong direction.

This is the first time that Eskilstuna has used sound in a semi-permanent light installation.

This initiative is the result of a collaboration between a municipal landscape architect, laser technicians from Laserimage and musician Peter Bjärgö. Ljudgången can be experienced in this version until Eskilstuna’s light festival “Nattljus” this autumn (21 – 23 October 2016). 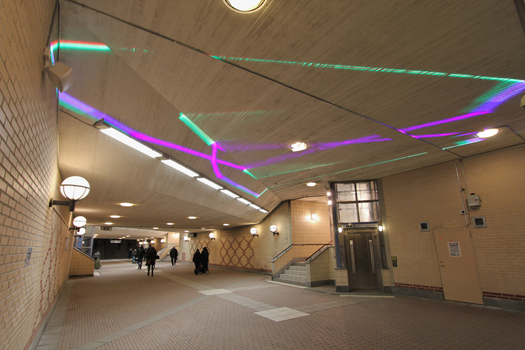