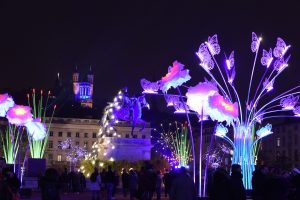 Over 190 participants gathered in Lyon for the 5th edition of the Lyon Light Festival Forum from 6 to 8 December 2018. The event was organised by the City of Lyon and LUCI during the internationally acclaimed Fête des Lumières, held in Lyon every December. It attracted representatives from more than 20 cities, as well as light festivals organisers, artists and lighting designers from all over the world.

This year, the Lyon Light Festival Forum theme was “At the Frontiers of Light”. The aim of the Forum was to open our minds on the new territories that light may enable us to conquer, to question our practices related to light, and to foster innovation and creativity.

Exploring the frontiers of light

Participants were invited to study these frontiers of light. Eight professionals from various backgrounds presented their experiences and their investigations on the subject. The first conference revolved around the exploration of urban light, with Marc Aurel, Jason Bruges and Pierre-William Glenn. 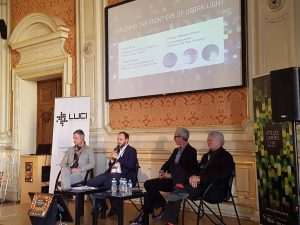 As a designer, Marc Aurel has long been involved in urban projects reinventing spaces through light. He worked on illuminating city centres, but also designed innovative luminaires. Through his presentation, he showed the audience how such projects can build connections between light and urban dwellers. Jason Bruges, an artist and a designer from London, used several of his creations to show how light could bring urban spaces or buildings to life. He talked about seeing the city through the eyes of an artist. Relating to this statement was Pierre-William Glenn. A cinematographer, most notably known for his work on Day for Night (François Truffaut, 1973), he explained how his work has often been about
“representation”: how a real space can be translated into a cinematographic one and how light can be a powerful tool for that translation.

In the end, the three speakers offered similar outlooks on light – although they came from very different disciplines. Working with, by, or for that substance, they have often blurred the limits between science and art, between technicity and emotion.

Innovation and creativity, the new frontiers of light

The second conference was another example of what it means to blend art and technology, specifically on temporary and festive light installations. Focused on innovation and creativity, this panel discussion gathered five speakers known for playing with the frontiers of light. The first speaker was Jean-Baptiste Hardoin, Multimedia Director at Moment Factory. Among other things, he worked on the illumination of the Jacques Cartier Bridge in Montreal. This was an example of how light could be used to enhance historical heritage thanks to a data-driven technology. At Théoriz Studio, Creative Directors David-Alexandre Chanel and Jonathan Richer, also produce innovative artworks using light and technologies they personally developed and researched. Echoing this duet of “artist-engineer-entrepreneurs”, Maya Benainous and Cyril Laurier introduced themselves as “craftsmen of light”. They have drawn upon a combined expertise in sound engineering, performing and visual arts to found Hand Coded. Their work seeks to use new technologies in the service of artistic creations.

Each in their own way, these five creative minds offered a glimpse of how technology can enhance light art installations.

Meeting with the organisers of the Fête des Lumières

Participants got to experience the Fête des Lumières, through guided tours and a meeting with the team behind the event. Jean-François Zurawik, its Director, Christophe Doucet, its Technical Director, Gilles Flouret, who manages the Major Projects of the Festival, and Romain Tamayo, who curates the Emergence Programme, answered multiple questions from participants. The organisers were asked about their selection process, the cost of the festival or the involvement of volunteers.

Yet another example of the internationalisation of the Fête des Lumières, a presentation was made

by Julien-Loïc Garin, Founder and Project Director of “Lumieres HK”, Hong Kong’s first light festival. The festival’s first edition was held in November this year, with the support of the City of Lyon.