Nighttime is a caricature of daytime in that everything seems to be intensified. The night reveals people and has a lot of things to say to daytime and to tomorrow.

A space and time that has been neglected for a long time, now under pressure, taken over by daytime activities, nighttime is rebuilding itself, for better or worse. Thinking about the city at night with these contradictions and paradoxes can help us to “experience” a complex world in which the answers can no longer be caricatured. It has always been a time and space for creativity where artists, designers and agitators come to seek refuge or inspiration from their nocturnal muses.

There is no one night but a continuum of nights. Nighttime is an opportunity and an obligation in terms of social dialogue, democracy and townplanning. The responsibility of everybody and nobody, a sensitive question that concerns all of us, a complex time and space which requires a shared inter-disciplinary, cross-cutting approach, nighttime is an effective and perceptible key to reconsidering our cities and inspiring society, far from the cold certainties of the day. It requires a time-space and “chronotopic” approach and encourages us to rethink the rhythms and modes of occupation of a malleable city. By allowing experiences which involve all of the senses, nighttime can reveal other ways of being in the world and increase the sustainable development of creative and ethical dimensions.

Starting to study and work on urban nights means experiencing “a nocturnal way of thinking”, integrating the knowledge specific to these time-spaces, and learning how to manage inevitable tensions between commercial areas, areas of creativity and escapism, and areas in which people can seek privacy.

The solutions developed for nighttime in our cities (night charters between residents, owners of establishments and consumers, night mayors, mediators …) are of interest in that they offer mediation rather than regulations.

Light is at the heart of a “nocturnal way of thinking” which compels us to incorporate a paradox: without light, there is no city at night but too much light kills the night. It is therefore necessary to retain a sense of moderation and ask ourselves the question “How much is too much?” If we want to enhance nighttime through the use of lighting, this task could concern four specific points: the first is equality of lighting in terms of the various districts of our cities, given the current discrepancy between centres and outskirts; the second concerns the intensity of lighting, given the risk of light pollution; the third concerns adjustment of lighting at night according to the presence of people; the fourth concerns a lighting approach on individual terms by rethinking portable lighting and the traditional torch.

Future urban nights remain to be invented together with, at first, some rules: ensure that they remain spaces of freedom and innovation by making way for improvisation, mystery and the unorganised. Let’s make sure that nighttime retains what makes it different and that it does not simply become the equivalent of daytime. Let’s not put an end to shadows. Let’s keep away from harsh, prison-like lighting. This original change must be retained by heeding the warnings of chrono-biologists: without rhythm, there is no life.

In a space and time where notions of safety and freedom are essential, we can devise “nighttime urban planning” based on hospitality, quality, equality, sensitivity, variety and the unexpected; safety by increasing human presence and enchantment. Applied to daytime, these principles of “giving consideration to nighttime” could contribute to urban planning strategies based on connections, interaction and mediation rather than separation and zoning. Sharing rather than separating. Contractualising rather than imposing. One can yet dream of cities which are more liveable, human, accessible and welcoming at nighttime and daytime by continuing to be inspired by Situationists: “Open the underground at night, after the trains have finished running (…). Leave public gardens open at night. Keep their lights switched off. Equip street lights in all the streets with switches”.

Tomorrow is another night. 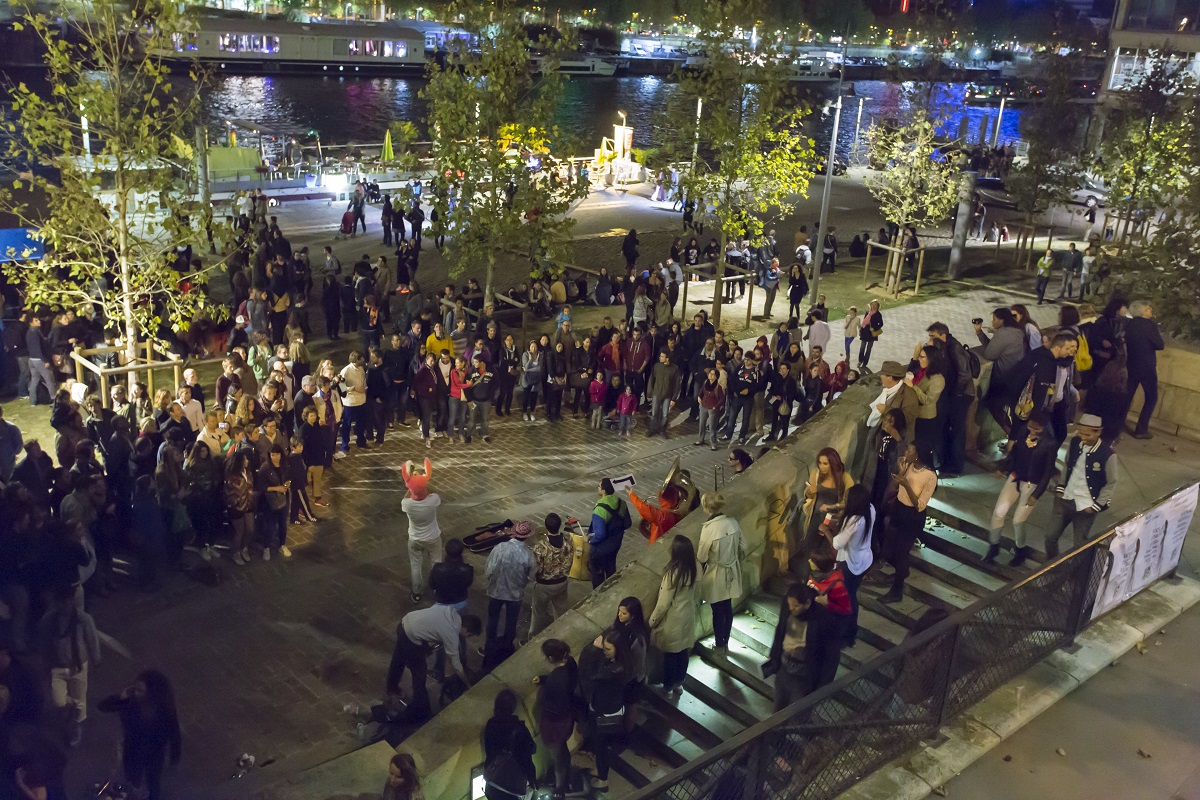 See what Frederic Hocquard, Elizabeth Johnston, Kaoru Mende, Mirik Milan, Leni Schwendinger and Jess Scully –  have to say on the nighttime in cities.