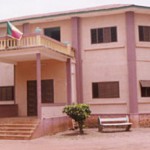 Abomey (Benin) is a historic, pre-colonial city of 78,341 habitants with a strong royal tradition. It is the administrative centre for the Departments of Le Zou and Les Collines.

The Commune of Abomey has a multitude of tourist curiosities related to religious and cultural heritage including:

In terms of urban development, the City of Abomey has inherited its policy of traditional occupation of space from the former kingdom of Danhomey (Abomey was the capital). It was only during the revolutionary years, in this case 1980, that a major urban development programme was launched in the city by the opening of roads and provision of services to the built-up areas.