Lyon Light Festival Forum 2018 – creative lighting in all its forms

This year’s Lyon Light Festival Forum gathered over 200 city representatives, light festival organisers and artists from around the world to explore new forms of creative lighting on 6 – 8 December 2018 during the Fête des Lumières in Lyon.

The event, which was organised by the City of Lyon and LUCI, included two panel discussions and a series of Pecha Kucha presentations featuring cities, artists and light festivals around the world, as well as an exclusive Q&A session with the organising team of the Fête des Lumières. 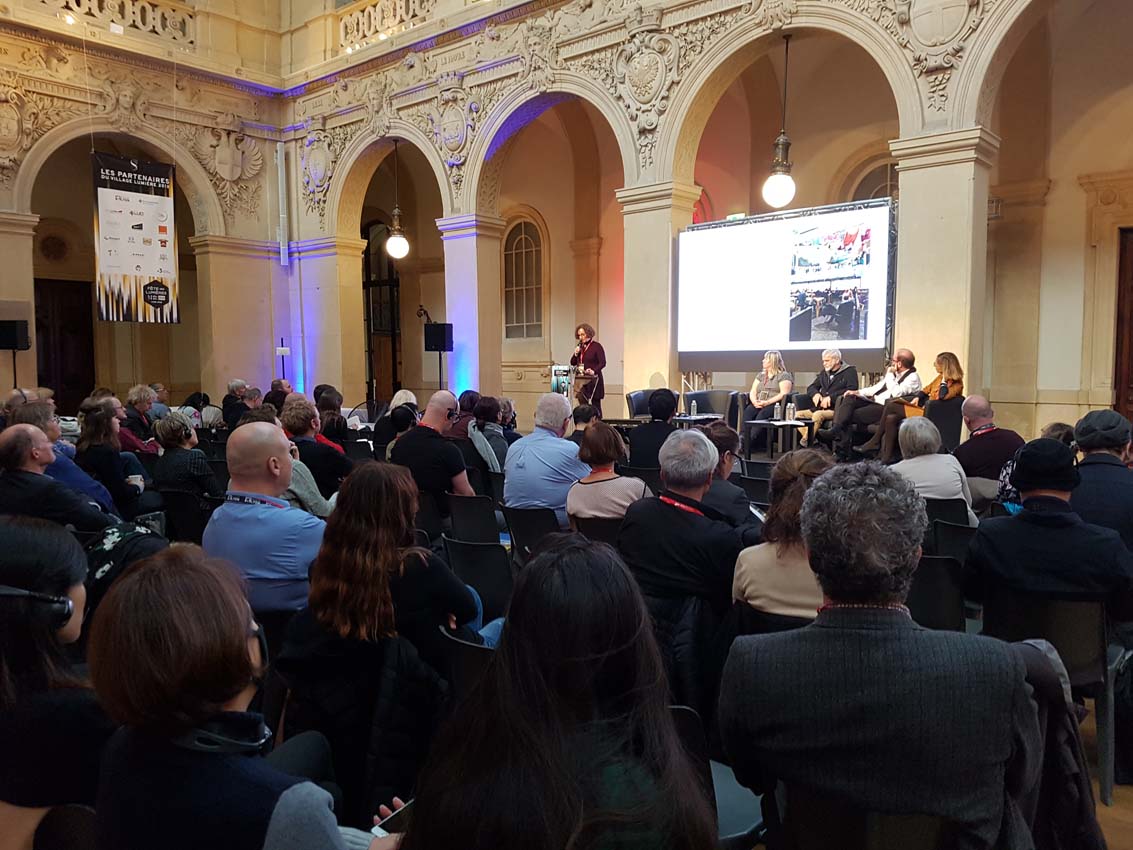 Light – helping cities to be more creative and engage people

The first panel, exploring how light can be used to reveal the creative potential of cities, was moderated by Thierry Marsick, Director of the Department of Urban Lighting at the City of Lyon.

It featured Piia Rantala-Korhonen, Director and Advisor to the Mayor in the City of Oulu, Maria Güell, Artistic Director of the LLUM BCN festival in Barcelona, and Ann Wishart, Arts Development Manager at Leeds City Council, who explained the objectives and evolutions of their cities’ respective light festivals and creative lighting strategies.

The fourth panellist, Michel Lemieux, Artistic Director of Cité Mémoire & Lemieux Pilon 4D Art presented an innovative project in Montreal using light to reveal the soul and the memory of the city every day. 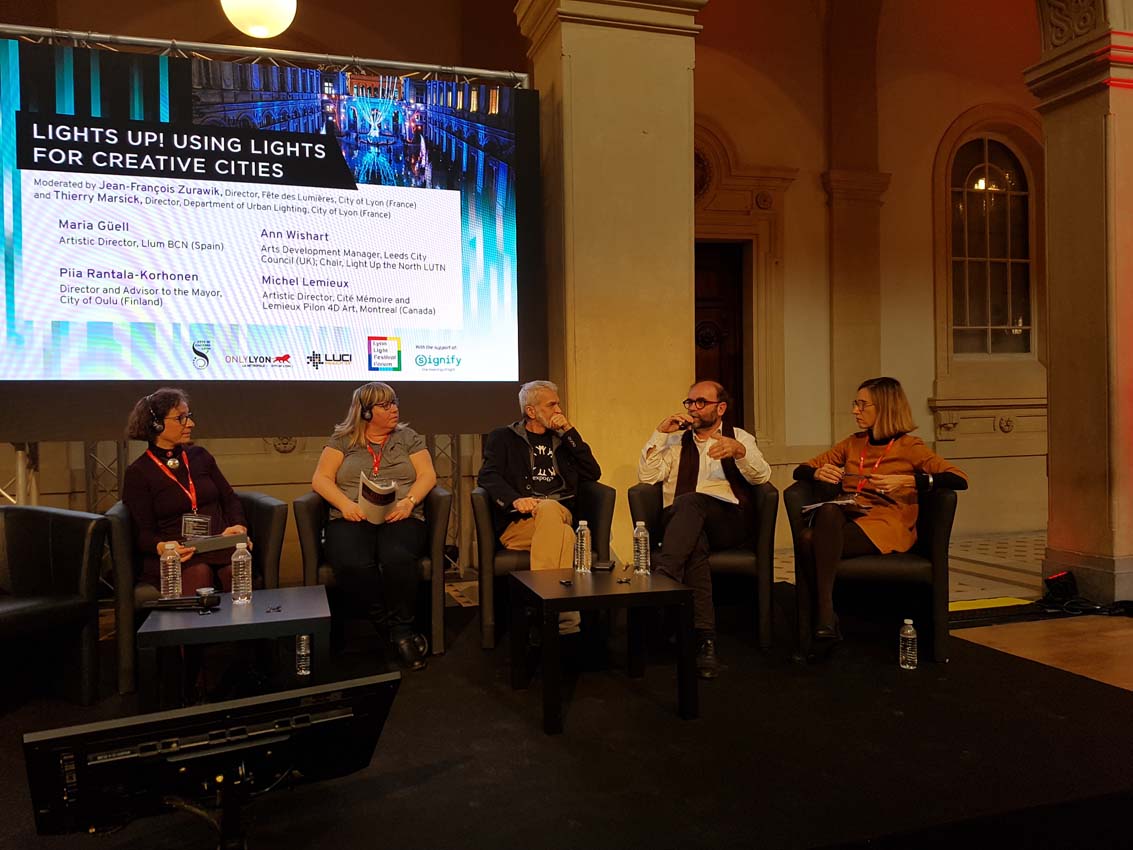 The discussion explored how permanent and temporary lighting projects contribute to the city’s overall creativity and help drive citizen engagement. Culture can be created and experienced by anyone and light art is very accessible and democratic.

Panellists agreed that light was an excellent tool to reach, touch and involve people – be it young children via participatory projects in Lumo Light Festival Oulu, design students for light installations in LLUM BCN, marginalised locals through Light Night Leeds, or the general public as they discover the hidden history of the buildings down the street in Montreal.

New forms of creative lighting – is media architecture the future?

Moderated by Jean-François Zurawik, Director of the Fête des Lumières at the City of Lyon, the second session built upon the first session’s conversation to showcase concrete examples of new forms of creative lighting projects and events emerging throughout the world.

Jérôme Donna, Lighting Designer and Artist at the Department of Urban Lighting in Lyon explained the art and science of some of  Lyon’s creative lighting projects. He was followed by the Dutch artist Titia Ex, who shared her light art installations and how they help activate the city’s public space. Thorsten Bauer, Creative Director of Urbanscreen, spoke about the convergence of the digital and the real world and raised questions about its impact on urban lighting in the future. Howard Griffin, Senior Lecturer and Programme Director of the M.A. Architectural Visualisation at the University of Kent, shared his work on how projection mapping changes people’s perception of public space. 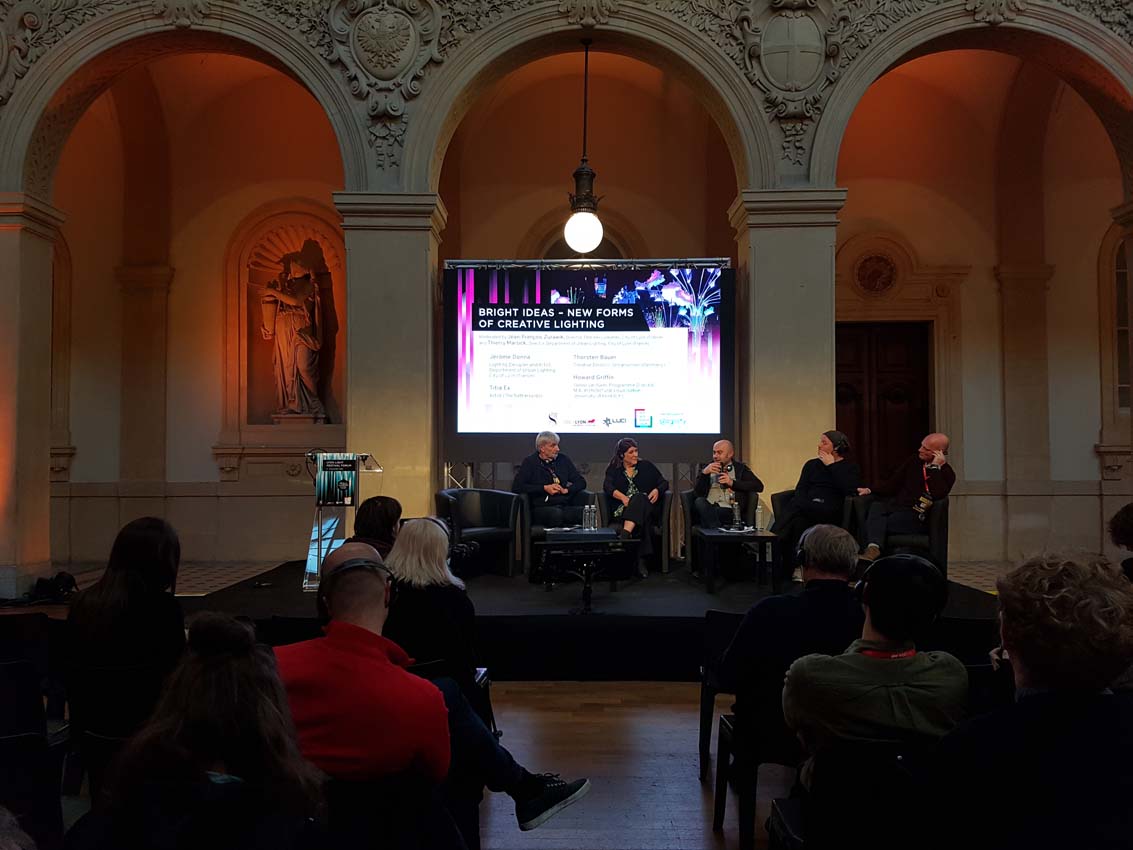 The discussion centred on the role of projection mapping in the city and urban spaces in the years to come. In a future that will undoubtedly bring a convergence of technologies and realities, a convergence of the real and the digital world, what will be the impact of projection mapping on how people perceive urban space, and how can cities integrate it with permanent urban lighting? 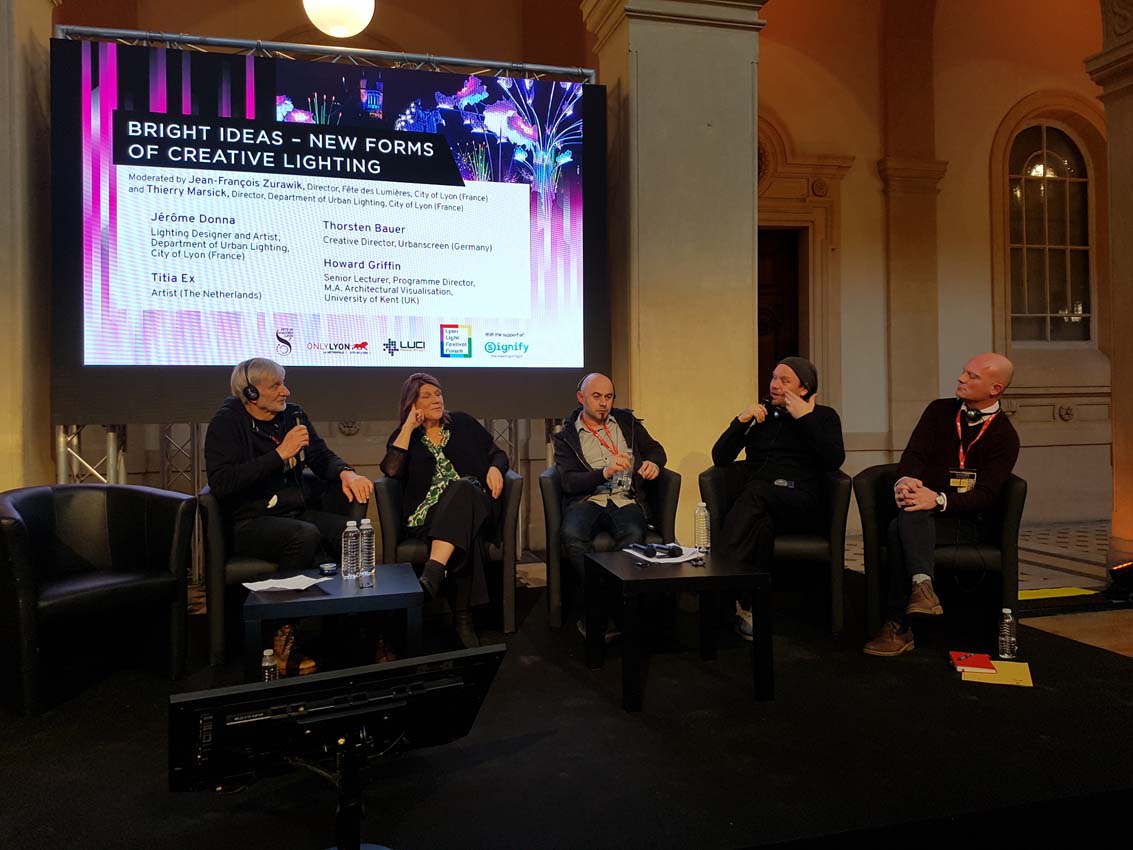 Panellists agreed that while incessant projection mapping in its current form could fast lead to viewer-fatigue, the potential evolution of mapping design and technology could help it become an integral (and almost imperceptible) part of urban architecture in the future – creating a new “spatially augmented reality” in the urban space.

However, a challenge that cities must address is how to reconcile this potentially ever-changing, dynamic vision of urban forms of the future, with the decades of work that has been done on urban lighting master plans and the creation of city nightscapes that have become defining elements of city identity.

New this year were the Pecha Kucha– style speed presentations, which gave artists, city lighting professionals, designers and light festival organisers the opportunity to share their work with an international audience of their peers.


It featured a broad mix of creative lighting initiatives from around the world, ranging from Borealis, a festival of light in Seattle, to the City of Light project in Jyväskylä, the Luci d’Artista festival in Turin, winter light festivals in the City of Linköping, new lighting for the Antwerp cathedral, and the Galway 2020 Digital Capital of Culture strategy…… to the interdisciplinary artistic collaboration #UniversUs by Forum InterArt. Other artists such as Creatmosphere, PaintScaping and OCUBO also presented their creative processes and artworks. 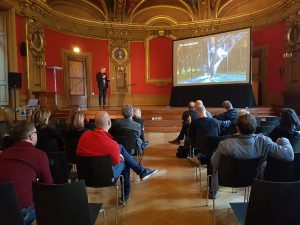 Behind the scenes of the Fête des Lumières

Participants had the opportunity to meet the team responsible for the event in a Q&A session on Saturday morning. 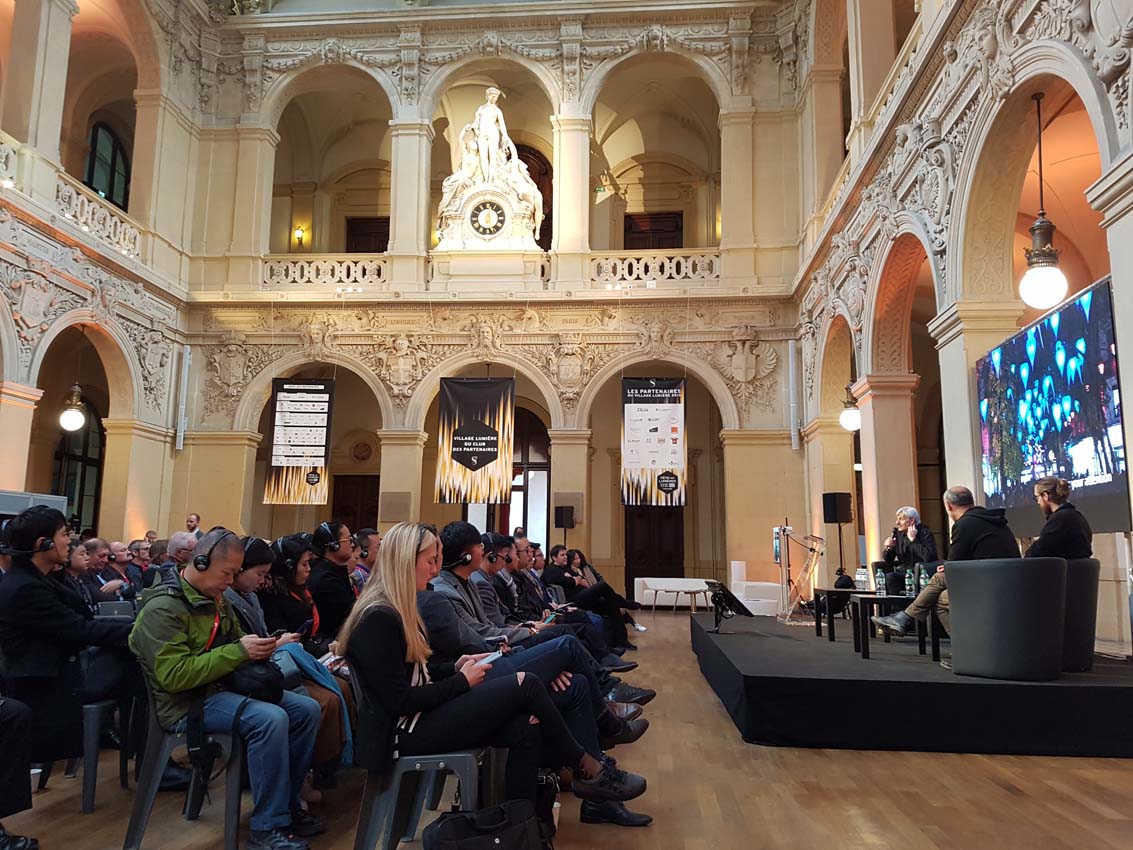 The Fête des Lumières Director, Jean-François Zurawik, Gilles Flouret, Manager of the Major Projects of the Festival, and Romain Tamayo, Manager of the Emergence Programme, answered multiple questions from participants.

The event participants also had two nights to experience the unique atmosphere of the Fête des Lumières, with guided tours and the opportunity to meet some of the festival light artists on site at their installations.