The City of Rotterdam inaugurated new LED lighting for the Erasmus Bridge on 25 March 2017, just before the start of Earth Hour.

The 802-metre-long cable-stayed and bascule bridge across the New Meuse river connects the north and south parts of the city. The Erasmus Bridge, symbol of the Rotterdam skyline, is the second largest in the Netherlands.

A switch to LED has now become possible with new technology suitable for the long bridge cables which extend up to 300 metres. 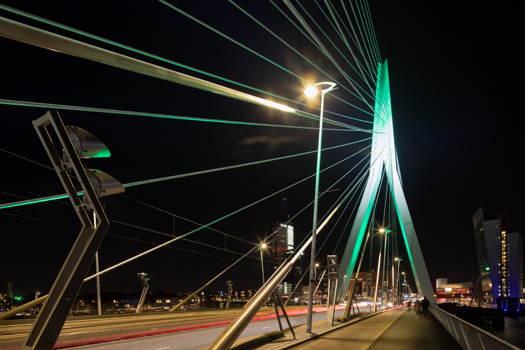 The new lighting design, which involved the architect of the bridge, Ben van Berkel of UNstudio, aimed to retain the appearance of the original lighting. In addition to the standard illumination in white, the municipality was also looking for the possibility to implement different colour patterns on the bridge for special occasions.

The new lighting of the bridge uses 68 LED fixtures (34 white and 34 multi-colour) with the DALI protocol control system. It has 20 pre-programmed colour patterns. The new system will reduce the energy consumption of the bridge lighting by up to 70%, saving 50400 kW of energy and 26500 kg of CO2.

The contract was awarded to Dynniq, which has realized the installation in collaboration with Industrielicht. Dynniq is responsible for the production, installation and maintenance. The lighting scenarios are by ACT LIGHTING DESIGN.

Take a look below: