The cities of Geneva (Switzerland) and Putrajaya (Malaysia) are each launching new lighting festival initiatives this winter.

Geneva just inaugurated a new light festival last week, entitled Geneva Lux, which will run from the 28th of November 2014 to the 12th of January 2015. It aims to combine annual end of the year illuminations with original light sculptures specially created for the City of Geneva. Read more here 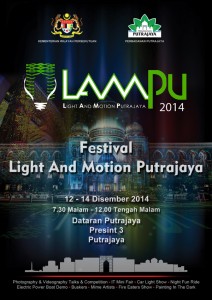 Putrajaya in Malaysia will also be launching a new light festival this December – Light and Motion Putrajaya (LAMPU) 2014 held from the 12th to the 14th of December 2014. Derived from the Malay word “Lampu” which means lamp, LAMPU 2014 will include diverse displays of light, audio and motion.