The lighting design of the Rivers of Light walk springs from the basis of the historical and philosophical meaning of rivers, water, light and colour, and their close relationship with the origins and development of the city of Valladolid. Rivers of Light transmits a message of memory and knowledge, of the flow of new ideas, thought and culture, involving growth and energy, life and movement, connecting with the people, both citizens of Valladolid and visitors alike. 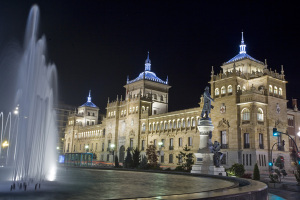 The objective of the lighting design was to provide citizens of Valladolid with symbolism and visual comfort, taking into account energy and economic factors. Based on this premise, and considering that lighting should adapt to the people, the result is an effective light feature, created with a highly aesthetic component that adds quality to the city of Valladolid in the evenings. The light path thus acquires its own unique personality, becoming a cultural and tourist attraction.

The Rivers of Light walk flows through and connects different areas of the centre of Valladolid. Each area includes buildings and monuments as well as streets and squares. In Valladolid, as in many other Spanish municipalities, the city centre is the focus of active urban life and experience. People work, go shopping, meet and gather in a city centre full of bars, cafés, restaurants, public plazas with benches, street terraces in the summer. One of the many advantages of Rivers of Light has been the creation of a new night vision of Valladolid its most important historic monuments and squares have appeared: some dressed in a new, more comfortable and elegant light, whilst others have suddenly emerged from the darkness. Rivers of Light thus offers all the citizens of Valladolid a new vision of its heritage and of the urban environment, injecting pride, strengthening its social and cultural identity, and adding enjoyment to experiences of the city.

Atjehstraat in Rotterdam was a forgotten street in a deprived area. The district used to be characterized by old warehouses, quays and dense living areas. The cheap houses were the main reason for the non-diversified population and the district had a bad reputation.

The Broken Light project by Rudolf Teunissen was a social sculpture for the street’s residents who literally and figuratively speaking welcomed a little light into their neighborhood – a street that until a few years ago was rife with crime. 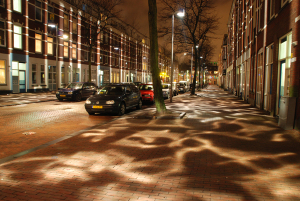 The project was subjected to several meetings with the local residents. The inauguration was organized in cooperation with all the residents of the Atjehstraat, where they organized a multicultural street party. The Broken Light project strengthens the bond between the residents of Atjehstraat and the surrounding streets. Atjehstraat has become through this project part of the social and cultural development of the neighborhood and contributes to the economic development of the area through the increased attractiveness of the street.

The project design includes the illumination of both horizontal (the pavement) and vertical (the building facades) surfaces of the street. The vertical lines of light in this project resemble columns and the rhythm of these columns creates the ambience of an interior space. In addition to this, the pattern of light on the pavement produces a kind of watery but broken light effect that combines well with the static vertical effect. This is the basis of the Broken Light project.

Kanazawa City has been developed as a castle town for 400 years and is known to have a strong historical aspect to its character. The castle was constructed on a high plateau and the city expanded around it, so that today the castle stands in the heart of downtown Kanazawa. 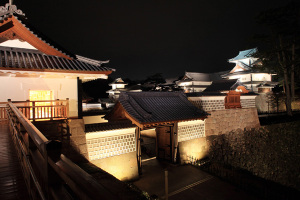 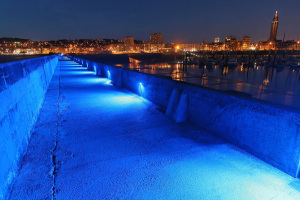 The calm vision is a blue band of light on the ground of the breakwater, a sort of carpet horizon on which the visitor walks glare-free. That makes it possible to see the town at night and of course the dark lunar sky. This light effect of blue from far away, from several points of view, creates a blue protective horizontal line against the sea. The blue contrasts well with the beacons of fire, both port side and starboard, and at the entry and exit of the port.

Another system of light for tempestuous periods is placed port side, within the shelter of the wall of the breakwater to set ablaze sprays of water of several tens of meters in height. This technical process only starts when the sea is stormy, bringing a new vision to this 16th Century town.

Click here for more information on the cpl awards