Underpasses in the Dutch capital, as in many cities around the world, are not always considered pleasant or safe by pedestrians and cyclists. 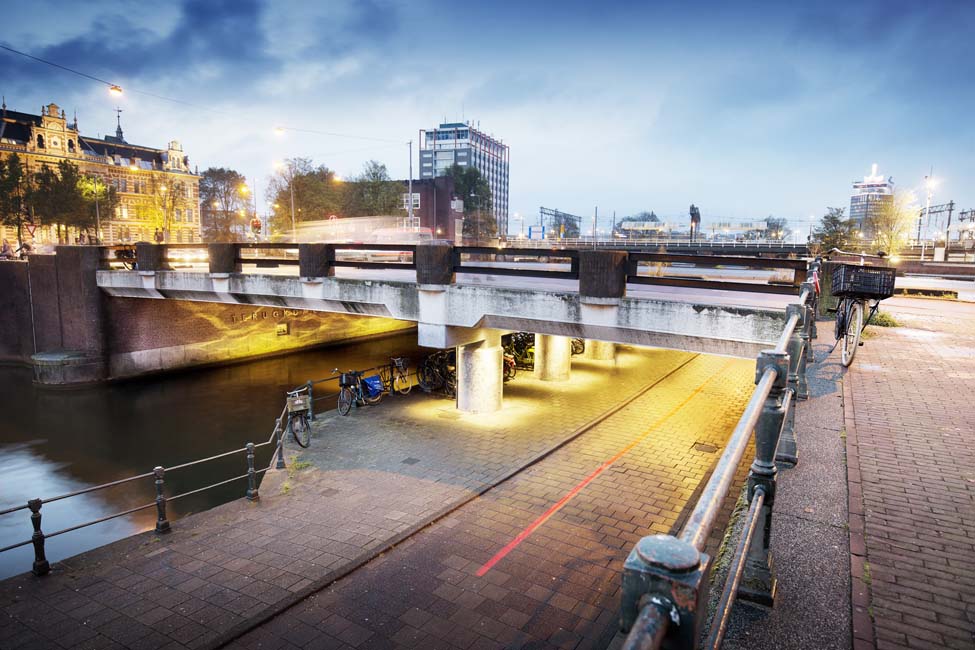 That is why the City of Amsterdam is conducting research on what influences people’s perception of underpasses (i.e. covered passageways, tunnels and viaducts).

The ability to orient oneself in an underpass is key.

“We found that the ability to orient oneself in an underpass is key. When entering, you immediately want to clearly see where it ends so that you can continue your journey,” explains Hans Akkerman, Senior Advisor Public Lighting in Amsterdam.

The study also found that too much contrast (light, materials, pavement) should be avoided.

Since the use of natural light has long been overlooked when designing underpasses, most are illuminated 24/7 with inadequate artificial lighting that creates shadows and dark spaces that decrease the feeling of safety.

Generally sober underpasses can benefit from a more creative form of lighting.

“A good way to improve the situation in existing underpasses is of course through lighting. We find that the generally sober nature of underpasses can benefit from a more creative form of lighting, be it in addition to the existing functional lighting or not,” says H. Akkerman.

The city inaugurated two such creative lighting projects in 2018. Contractors had received an open assignment to illuminate selected underpasses in a more attractive way, taking into consideration existing artworks in the underpasses, a modest budget and easy maintenance.

In the Haringpakkersbrug underpass – a low pedestrian passageway that runs alongside a canal near the Central Station – a specially developed ceiling armature utilises the ever-moving water’s reflection to create a soothing and appealing visual effect both night and day.

It also illuminates the artwork Coming Back Is Not The Same As Staying on the wall opposite the water which was barely visible before. 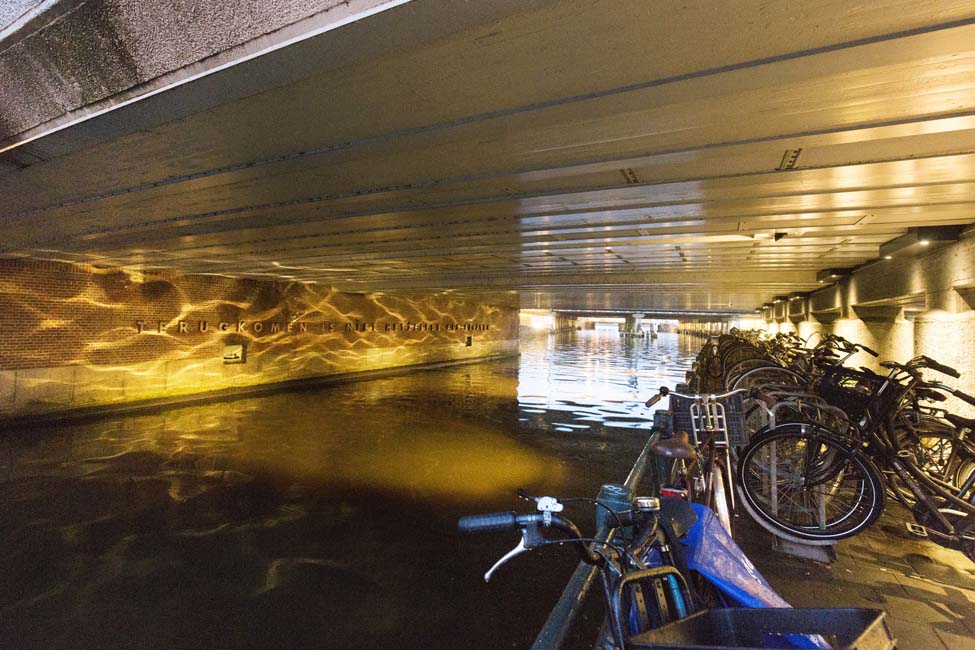 “The underpass is rather low, with wide columns and empty space behind each pillar that was not properly lit, leading to public urination, waste and fallen bicycles.

The new lighting, with a customised armature by Marco de Boer of Primo Exposures, has resulted in effective lighting for the entire underpass including the columns, their surroundings and the ceiling,” explains H. Akkerman. 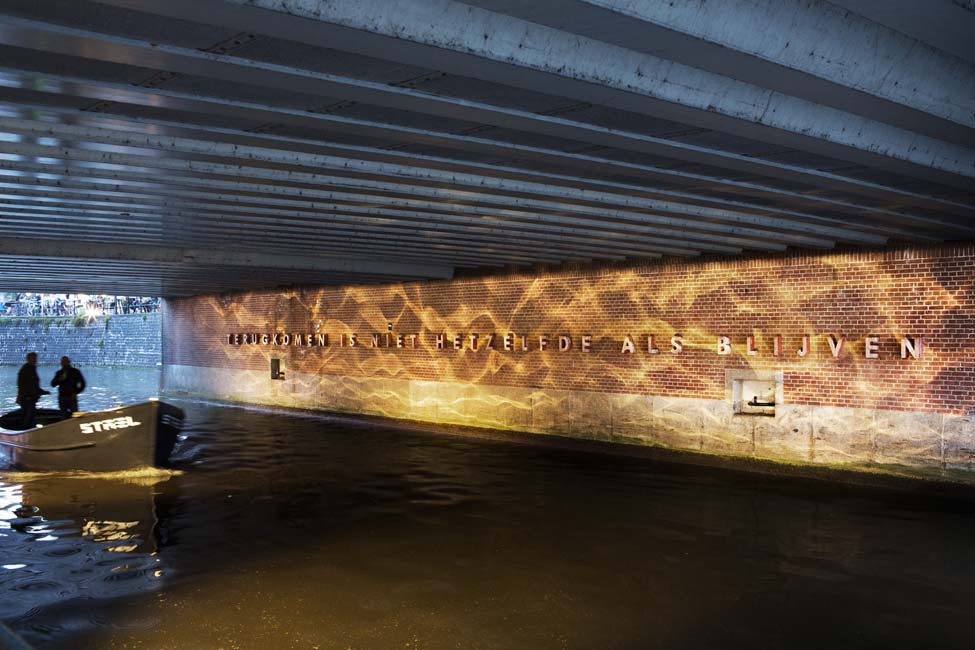 Another successful creative lighting project concerns the much-frequented underpass between the Hortus Botanicus/ Artis Zoo and Hermitage Museum in the Plantage district. “Here too, there were unlit spaces and at times it felt eerie,” explains H. Akkerman. 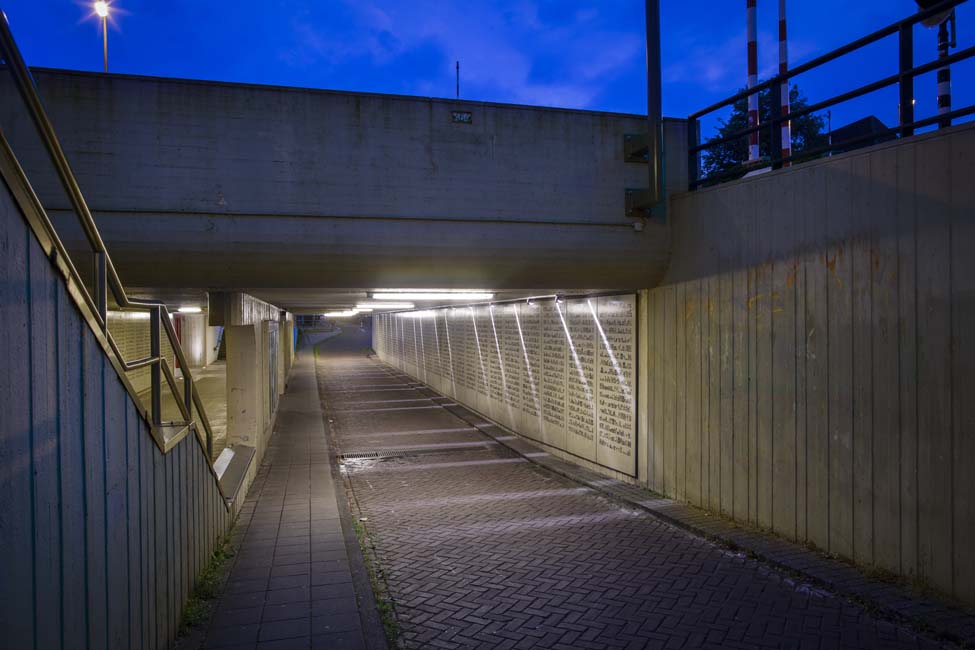 Linking to the existing artwork by Lou Heldens featuring fantasised hieroglyphs on the walls of the tunnel, the lighting effect creates rays reminiscent of an Egyptian funerary tomb opened after centuries.

“In addition to creating a safer and more playful ambience, the new lighting has given the tunnel’s artwork an extra dimension,” says H. Akkerman. 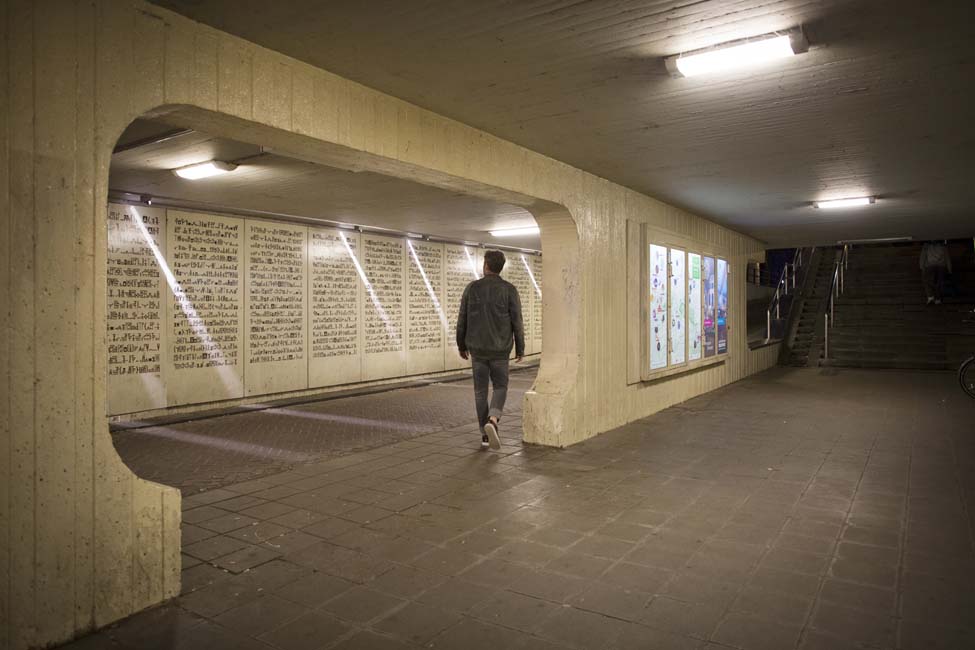